I have been back in the UK for a week now and I am already struggling to cope with what I once considered normality. Why is everything so fast paced? Why does nobody greet me with a handshake? And why on earth has my boiler stopped working?....Kenya 1, UK nil! But as I begin to settle into my daily routine, I start to notice the impact this experience has had on my life and how it has aided my personal and professional development. I am a lot more tolerant (this was particularly noted on my first tube journey back to work) and open to new ideas/way of doing things.  One thing I admired whilst working at AfCiC was the collective nature of the organisation and the strong sense of community, you really do feel part of the team, a key trait that I want to try and implement in my organisation.  It has made me realise how important relationships are, in any setting, good or bad, it’s how we manage these relationships that will determine the success of the outcome.
I didn’t go to Kenya expecting to change the world, but I did hope to make some impact and at the same time learn more about myself; I think I have managed to achieve those goals. I have most definitely left taking away far more than I came with.   I believe volunteering is an invaluable experience and one which everyone should try and explore. So if there are any AFID members (or anyone else) sitting at home reading this thinking “Should I?” I say take the leap…you only live once!
Posted by Kara at 03:15 No comments:

So today was my last day in the office and I can’t believe how fast time has flown, seems like it was only the other day that I was first introduced to the team.  Despite having told everyone at the beginning on the week that today would be my last day, I still received shocked reactions....”what do you mean today is your last day?! I thought you had a few weeks left!” (the most common reaction).  I think they are all still in denial… I won’t be surprised if people still ask where I am on Monday.
The staff had brought me a gift, a couple weeks earlier, which they had locked in the office cupboard for safe keeping.  On realisation that it was my last day they went to retrieve my present….I was busy typing away trying to tie up some lose ends, not realising the commotion that was going on around me (they were all conversing in Kikuyu).  It was only until I looked up and asked what was going that they confessed….”So Kara” Nancy started, “We brought you a present, and put it in the cupboard, but now nobody can find the key!” Flattered, I told them not to worry about it, but they insisted that I must get my present before I left the country.  So they all attempted, one by one, to pick the lock using various tools, I even tried myself, but failed miserably….shame, it always seems to work in the movies. After a number of successful attempts, Philip, one of the Legal workers, managed the break the lock with a knife!  So much elation filled the room we almost forgot about the present.  It was a nice gift…a photo frame (ill put one of the group photos in that) and a scarf (in preparation for the cold winter ahead).
After having lunch together, the rest of the afternoon was pretty slow going….always the case on Fridays.  Around 4.45pm it was lights off…but fortunately not quite the end of my adventure, we have all planned a group trip to Fourteen Falls and Mount Killimanbogo tomorrow, so the saga continues….
Posted by Kara at 14:07 No comments:

I thought I would write a bit about the accounts and the things that I have been working on over the past couple weeks so that future AFID volunteers have an idea of the type of work they may be involved in…contrary to what people may believe, it has not been all play and no work!
At the beginning of my assignment Eleanor and I sat down and drafted some objectives that we hoped I would achieve by the end of my placement.  I have been working closely with Nancy, the administrator, understanding AfCiC’s financial processes and bringing the budget up to date (which had not been updated since August).   As a result, I have spent quite a bit of time educating Nancy on the importance of having accurate and up to date financial information to aid decision making and the role of the budget as a key control mechanism.
The accounts are maintained in Excel and are relatively simple to follow, but the input is manual which means it is prone to human error and can be extremely time consuming to update (even more so if someone has fallen behind).  The previous AFID volunteer introduced VLOOKUP/SUMIF formulas into the budget linking the numerous Excel workbooks together which has saved time.  However, certain tasks, such as inputting cash from bank statements, still have to be done manually.  AfCiC also work on a cash accounting based system, actual revenue and expenditure is entered in the budget only in the period which it is received/paid, they don’t really apply the accruals concept here.
The rest of my time I have spend providing one to one coaching and training with programme managers and staff members helping them understand some of the basic accounting concepts, the significance of the budget and how their weekly expense submissions fit in with the overall financial process.  In addition, I have also provided the managers with some basic Excel training (although I am no expert myself) producing some simple expense templates, at present they all maintain their accounts on paper.
Other adhoc tasks include, compiling a financial procedures manual and financial guidelines document for staff members  and managers.  It has been fun…I never thought I would say that about accounts! But all the staff are so enthusiastic and willing to learn, it has made my job a lot easier.
Posted by Kara at 04:54 No comments:

As Thursday was a national holiday in Kenya, I took the opportunity to go on a four day Masai Mara camping safari.  My adventure started 7.30am Thursday morning when I was dropped off at the tour company offices in Nairobi; by 8am we were on the road, picking up other members of the group along the way.  The journey to Masai Mara was approximately 5hrs, but we stopped off at the rift valley view point and also for lunch, so it broke the journey nicely.  I was forewarned about the rough journey to the Mara, but nothing could prepare me for the reality….it was a bumpy ride…pot holes everywhere, I can’t count the number of times my head hit the roof of the bus.
We arrived at our camp late afternoon, dropped off our bags, then went straight to the park for an evening game drive, we saw zebras, buffalos, elephants, giraffes and more, all on our first drive, we even saw a lion and its pride.....and literally 2mins after that we all had to get out of our bus and help another bus that got stuck in a ditch; which, might I add, was only a couple of metres away from a rotting buffalo carcass (i'm guessing this was the lions doing)…now that was something. The whole experience was like watching a real life documentary…I was expecting David Attenborough to pop up from somewhere and start giving me a running commentary.   We stayed in the park until sunset and then returned back to camp for dinner then bed for another early start the next day.
Friday we set out early and spend the whole day in the park…we saw pretty much the whole of the Lion King cast (definitely need to watch that film again!).  We even saw a black Rhino, which I understand is extremely rare…we got lucky.  In the evening we got the opportunity to see how the Maasai tribe live, probably one of the most iconic tribes here in Kenya, renowned for their nomadic lifestyle and their distinct physique and dress.   It was amazing to see how they live, their houses made of mud and sticks…with no windows (they told me this is to prevent mosquitoes entering) and all the amenities under one roof.

Third day we headed to Lake Nakuru, which was another 5hr drive, and stayed overnight.   This is not as big as Masa Mara, but very scenic and picturesque…a nice end to an amazing safari. 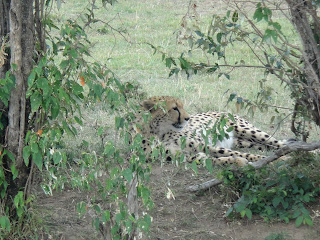 On Saturday, I got the chance to experience a real traditional Kenyan wedding  which was amazing!  We were invited by Nancy, AfCiC’s administrator and bookkeeper, I work really closely with her in the office.  It was Nancy’s brother that was getting married.  The wedding format is similar to the UK, you have the church ceremony, the reception and the evening party but with a lot more singing and dancing!
In true Kenyan style we arrive late and unfortunately missed the church ceremony, so we waited at the church for the busses to take us to the reception.  Now, imagine London Underground on a busy rush hour morning and you are trying to board the tube, but in this situation instead off a tube it’s a minibus, half the length of one carriage and about two thirds of the height, with a small door….this was my reality.  Take a look at the picture below….these guest took no prisoners, it was definitely survival of the fittest! 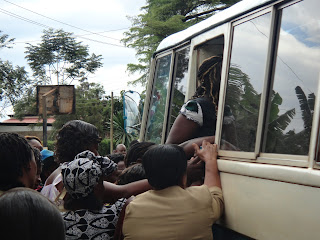 It was only until I got to the reception that I fully understood why there was such a mad rush to try and get on the busses.  The queue for the food was extremely long, luckily we saw couple of other AfCIC workers in the line and we pushed in….if looks could kill!
After the food the bride and groom arrived, it is tradition that when they arrive the guests run to greet them, singing and dancing…every able bodied person gets involved and they all dance around the venue in a line, with the bride and groom leading the procession.  Even I got down with some moves, albeit with a 5 second delay to the other guests; this was only because the MC was talking in Swahili might I add, not for my lack of rhythm!  So when he was saying “move to the left”  by the time I clocked on, they were already moving to the right! I soon got the hang, but it was a close call, could have blown my cover as a Brit posing as a Kenyan!
Posted by Kara at 00:25 No comments:

As my first working week draws to a close I thought I would share some of things I have observed and the activities I have taken part in since I arrived:
I could go on….but I will stop there.
I have had an eventful week and although I am here to help improve AfCiC’s finances, I have had the opportunity to do so much more here are a few photos:
Now time to enjoy the weekend...I have a Kenyan wedding to attend!
Posted by Kara at 07:01 No comments: